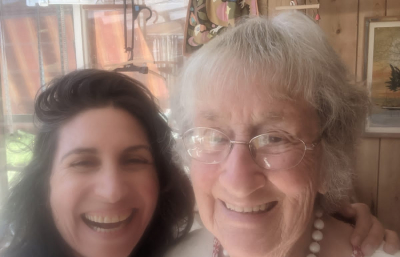 A time to be heard

Rosemary is just the kind of community member Social Health hoped would participate in our  ‘Meaning, Purpose and Connection’ project.

‘Living on your own is very lonely, my children don’t live close by and I just thought it would be nice to have someone come and sit with me,’ Rosemary said. ‘The neighbours are lovely but they don’t have the time.’

The youngest of four children with three older cousins who around much of the time made Rosemary feel growing up that she always had to ‘wait her turn to talk.’ Her husband, a boisterous man with a big personality also made her feel like she needed to take a back seat.

‘Visitors would come to the house but I could never talk to them because he would take over. If I was telling a joke he would tell the punchline before I got there! ‘I feel like it’s my time to be heard.’

Rosemary says that her time with two different Social Health volunteer practitioners, ‘makes up for all the times I never got to say what I wanted to say. She also told us that her visits have allowed her to talk about topics she didn’t feel comfortable discussing with her children, such as the death of her husband and partner of more than five decades

‘They don’t need to know everything I’ve been through,’ she said. ‘And sometimes when you voice things out loud you can think about them and see them from a different angle.’

One other thing ‘Meaning, Purpose and Connection’ gave Rosemary was an excuse to wear some of the many dresses that the avocational seamstress made for herself over the years. ‘Every time I’d wear a different dress, I’d think of a new story to tell.’